The original Carnegie Library, in Lewiston, Idaho, was closed as of Thursday, September 30, 1999. According to the following article, the reduced circulation did not justify the cost of operation of this branch of the Lewiston City Library.

Andrew Carnegie provided a grant of $10,000, on March 27, 1903, for construction of a public library in Lewiston, Idaho. According to the book, Carnegie Libraries by George S. Bobinski, Associate Dean of the School of Library Science at the University of Kentucky, and published by the American Library Association in 1969, a public library had been established in Lewiston, prior to the receipt of the Carnegie library grant in 1903. 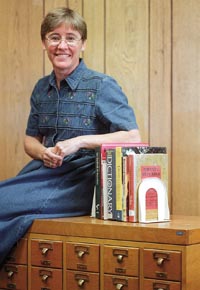 Tribune/Mike Venso
New Lewiston city librarian Dawn Wittman has the challenge of managing the outgrown and overburdened Tsceminicum Library while trying to help get a new library built.